Nowadays, density functional theory (DFT) calculations using approximate exchange-correlation functionals are widespread. Conventional approximate functionals such as B3LYP cannot evaluate the dispersion force that accounts for most of van der Waals force between non-polar molecules, and requires dispersion correction. Nakai’s Group has developed the local response dispersion (LRD) method as a first-principles dispersion correction method that depends on electron density. The dispersion forces acting between atoms and between atomic pairs are obtained from the response function of electron density in the form of C6-, C8-, and C10-coefficients, and are summed up for all combinations with a damping function that removes short-range components. In the case of the benzene-dimer calculation, the CCSD (T) result is well reproduced by using LRD method with C6-, C8-, and C10-coefficients between atoms and the C6-coefficient between atomic pairs (Fig. 1-C-1).

Since the LRD method can estimate the dispersion correction depending on the electron density, it can be applied not only to the ground state of the closed shell system but also to the open-shell system and the excited state. Furthermore, it can be used not only for quantum chemistry calculations using Gaussian basis, but also for first-principles calculation using plane wave basis. The LRD method is implemented in the de facto standard quantum chemistry calculation package GAMESS developed at Prof. Mark Gordon’s Group at Iowa State University.

Time-dependent density functional theory (TDDFT) is commonly used as a theory for calculating electronic excited states, but its accuracy depends on the exchange correlation functional used. For valence excitation energies, experimental values can be reproduced relatively well using general functionals such as B3LYP, but in charged-transfer and Rydberg excited states, long-range correction (LC) type functionals to correct the self-interaction errors (SIE) is needed. Nakai’s Group has clarified that the core excitation energy is significantly underestimated by using LDA, GGA, and hybrid functionals from systematic numerical assessment. We clarified that this underestimation is improved by correcting short-range SIE, and proposed a Core-Valence-Rydberg (CVR) functional based on the consideration. By using the CVR functional, the core excitation spectrum of ethylene could be demonstrated well (Fig. 1-C-2). 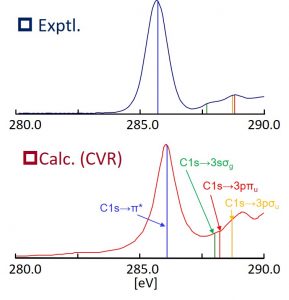 In the 21st century, the third artificial intelligence (AI) boom has arrived due to the easy access to big data and the development of technology for processing it at high speed. The central technology is machine learning (ML), which can formulate the law hidden in a huge amount of data as a function. The versatility of ML is very wide and it is applied in various fields. Nakai’s Group is working on research to solve problems in theoretical and computational chemistry using ML. 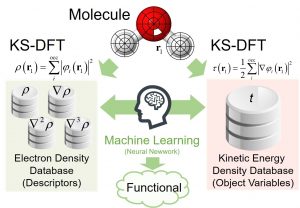 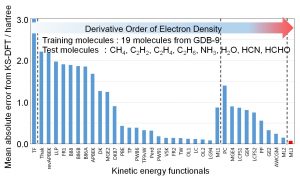 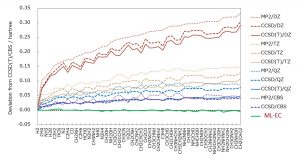 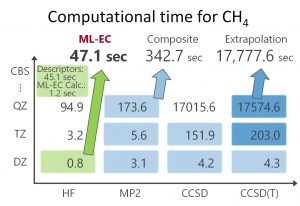