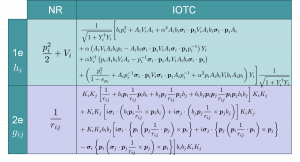 Nakai’s Group has developed a local unitary transformation (LUT) method that performs IOTC transformation for each subsystem, focusing on the locality of the relativistic effect. Electronic motions generally approach the speed of light near the inner shell of an atom, and their velocity decreases sharply as they are apart from the nucleus. The LUT method uses this property to limit the range to which the unitary transformation is applied to only the space at a distance below the threshold. As a result, both computational times for the conversion of the one- and two-electron terms become O(N) by the the LUT method, whereas they are O(N3) and O(N5) in the conventional method, respectively,

Namely, linear scaling is achieved. The LUT method for the one-electron term is the equivalent theory as the DLU method proposed by Professor Markus Reiher et al. Note that our LUT method is the only method that improves the efficiency up to the conversion of the two-electron term. As a further efficiency improvement, we also proposed a method of creating a database of LUT-IOTC-transformed two-electron terms for the basis functions of each element. 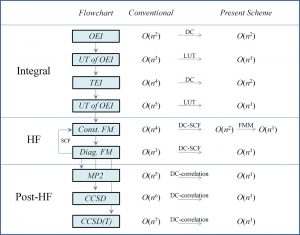 Furthermore, it has been extended to a method of relaxing the core orbitals (spinors) by the effect of valence electrons. This makes it possible to correctly reproduce core-level chemical shifts due to the molecular environment.

Such an effect is called a picture change (PC). However, in many quantum chemistry programs, relativistic DFT calculation is performed using the electronic density evaluated by directly using the two-component (or one-component) wavefunction. We have shown that by adopting the unitary-transformed density operator, the electronic density calculated with a two-component (or one-component) wavefunction agree well with that of the four-component wavefunction (Fig. 1-B-5 (left)). Furthermore, we proposed a relativistic DFT calculation method based on this picture change correction (PCC) electron density (Fig. 1-B-5 (right)). We further proposed a local unitary transformation (LUT) of the density operator to improve the calculation efficiency. Furthermore, we proposed a different method using the density matrix obtained by performing the inverse unitary transformation of the two-component wavefunction. We hope that the PCC-type relativistic DFT, which is the correct treatment from the theoretical point of view, will be widely used in the future. 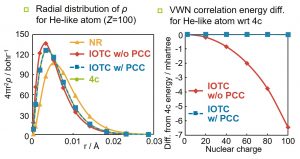